Atlantis will be landing soon, bringing the STS program to an end. After this historical final landing, the US will lose the capability of launching Astronauts in Space, until one or more of the commercial alternatives will be ready with a platform which NASA can use. The foreseen gap is about 5 years. Meanwhile NASA will concentrate on building the next major stepping stone for inter-planetary flight by creating the capability for humans to reach Asteroids and Mars.
Posted by GroundCrew1 at 8:51 AM

To of the main SSMS2 features have been revealed:

2. New 3D MCC: Now you can watch the mission from the FDO, GC, FD, etc. positions.
More features will be published in the near future.
Posted by GroundCrew1 at 7:26 AM

New Alpha of the upcoming "Space Shuttle Mission Simulator 2" has been released today to the Alpha team.
Posted by GroundCrew1 at 11:11 AM 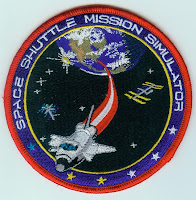 We are pleased to announce that Mr. Tim Gagnon, the artist who has designed many NASA patches and also the patch for our next generation simulator, has agreed to make available a small, limited and signed run of the SSMS2 patch.
This limited, artist-signed run is available for purchase until December 31st, 2010 and after that, only when SSMS2 is released.
The embroidered patch comes with the artist-signed and numbered Certificate of Authenticity, and is of the same quality as the real NASA missions patches. The patch can be sewn or heat-applied.
In order to take advantage of this advance-availability unique opportunity, please visit Tim's website and place an order.
http://sites.google.com/site/kscartist/store 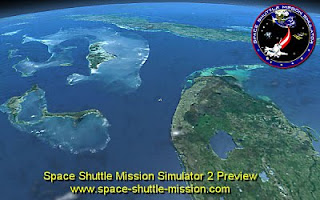 Check this link for more sneak peeks at the Space Shuttle Mission Simulator 2 Alpha: http://tinyurl.com/399yxja
Stay tuned for more to come.
Posted by GroundCrew1 at 10:55 PM 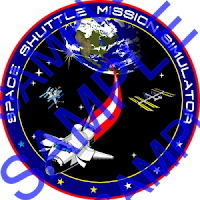 The next version of the Space Shuttle Mission Simulator(tm) has been revealed at the I/ITSEC 2010 show, at the NASA STEM booth on December 1st, at 09:00 EST.
The official name of the next version is
Space Shuttle Mission Simulator 2
...the legacy continues...
Among the main features listed during the announcement:
• New Earth engine: high resolution, photo-real Earth. 16 times higher than in current version.
• High resolution clouds
• High resolution Earth at night.
• ISS interior: seamlessly "float" between the docked Shuttle and the ISS, and inside the ISS.
• More, exciting and surprising missions
• More “to do” in space
• Fully interactive 3D cockpit
• More detailed GPC and gauges functionality
• Graphical enhancements and much more
Present at the show was Mr. Tim Gagnon of Titusville, Florida, who is a graphic and portrait artist with a life-long passion for Space Exploration and who has been designing patches for many STS missions and ISS expeditions - including for the upcoming STS-133. He also created the Space Shuttle Mission Simulator 2 (AKA SSMS2) patch.
His work is on display at the Kennedy Space Center, City Hall in Elmira, NY and the International Space Station.
In Tim's own words, the SSMS2 patch design has many facets:
"The focus of this design is the Space Shuttle on orbit. The Sun is about to set and we see the ISS and MIR in the background. In the sky the constellation Aquila (the Eagle) shines brightly. Its seven stars represent a typical seven member crew – but especially those lost on missions STS-51-L and STS-107.Across the bottom of the border are six stars. One is blue representing Enterprise as it never left the atmosphere. The two gold stars represent the lost Shuttles, Challenger and Columbia. The three white stars are for Discovery, Atlantis and Endeavour still in service."
And we add: "the setting Sun represents the conclusion of the STS program, while the Shuttle shooting for the stars, leaving a red-white American flag colors track, points to KSC - the launching stage for all STS missions."
The ETA for SSMS2 is Q3/Q4, 2010. The current version of the Space Shuttle Mission Simulator™ is available as a CD box at PC games and computing retailers across North America and Europe, and for online purchase in downloadable format at the SSMS official website: http://www.space-shuttle-mission.com/. The latest Demo can also be downloaded freely at the same website. Please check the “About” page and the downloadable manuals for more information about the simulator’s capabilities and scope.
Posted by GroundCrew1 at 10:45 PM

We are happy to announce that you will be able to visit us at the NASA booth (#585) at I/ITSEC – the biggest serious simulation show in the world http://www.iitsec.org/

We shall be there, presenting SSMS:TCE and answering questions about the sim, what makes it tick, current plans and its future roadmap.

During the show, on Wednesday, December 1st, we shall be revealing the official name of the next generation of our Space Shuttle Mission Simulator, its official badge and planned major features set. We shall also be revealing some sneak peeks at the current Alpha, including a short live demonstration showing off some of the features. This will be the first public appearance of the next version.We hope to see as many of you this December, in Orlando, FL at I/ITSEC 2010, at the NASA booth.
Posted by GroundCrew1 at 5:49 PM 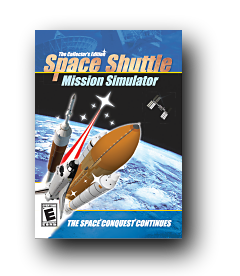 From liftoff to on-orbit operations, deploy, capture and service satellites (Hubble included), learn about and operate the RMS robotic arm, rendezvous, dock, supply and build the International Space Station, perform Extra Vehicular Activities (EVA) in first-person view, getting as close and personal as possible to the tasks that Space Shuttle Astronauts have been performing in Space, then land the Shuttle safely at the Kennedy Space Center or Edwards Air Force Base.

Do all this in stunning full stereoscopy(*), and control the Shuttle from a beautifully rendered, active 3D Virtual Reality cockpit.

Go into Space as only a handful of carefully-selected Astronauts have been going since April 12, 1981.